The festival showcased the creative work of students from all years of the program, based on questions surrounding humanity, self, and growth that they have been challenged with during their educational experience.

The co-editors of Iconoclast, Veronika Botnick, Jerika Caduhada and Catherine Cassels, along with many other contributors, published their newest issue Uprooted in Fall 2019.

The Interrogation of Baruch de Spinoza

The Interrogation of Baruch de Spinoza was a theatrical performance at the TAP Centre for Creativity. It was directed by Fourth Year SASAH student, Julia Sebastian, and was written by David Ives. It explored how all individuals wrestle with two conflicting desires: to remain true to themselves, and to be part of a larger community. In his search for the ultimate truth about life and the universe, young, free-thinking Baruch de Spinoza refuses to compromise his philosophical ideals, even if it means losing his family, friends, and his community forever.

The co-editors of Iconoclast, Nara Monteiro and Jerika Caduhada, along with many other contributors, published Hyphen in Fall 2018 and Mythic in Spring 2019.

This collection of poems was written throughout Rebecca’s final years of high school. They cover major issues, which are often avoided because they are seen as taboo, such as young love, the fear of death, and many other types of struggles.

Keyona "Key" Gallucci and is a fourth-year student pursuing an honours degree in Political Science and SASAH. In her first year, she participated in Professor Henri Boyi's Experiential Learning Course, where she volunteered alongside community-building NGO's in Rwanda. She returned to Rwanda at the end of her third year as a Western Heads East Intern and the team at the University of Rwanda College of Medicine and Health Sciences and conducted a feasibility study and business plan to introduce Rwanda's first probiotic food.

Keyona says that these experiences enhanced her perception of intercultural engagement and cultural sensitivity, and that she began to shape her undergraduate research toward studies relating to the Global South, specializing in the Great Lakes region of Africa. She says that she is so proud of her accomplishments and experiences as a SASAH student.

This Spring, Keyona will be showcasing a solo art exhibition, Afrique: By Nature, which is a visual representation of her experiences in Rwanda as a descendant of the African Diaspora. She will then be joining a team of five UWO Geography students in May 2019 to conduct a study on the Three Gorges Dam in China. In June, she will be beginning her 6-month internship in Tanzania with EQWIP HUBs.

Western Performs! is an annual concert series that is a collaboration between the Faculty of Music, Western Libraries, and SASAH. This academic year, seven SASAH students researched the musical programs and composers and provided information presentations about the musicians, instruments, and the historical contexts of the pieces for the audience.

Former SASAH student Levi Hord, was amoung a group of students who received the 2019 London Heritage Award for their work on the Woodland Cemetery History Project.

To celebrate Western Library's 100th anniversary, students from SASAH, and the Arts and Humanities Student Council were asked to create a book sculture.

Past examples of student projects

"Portraits: Self and Others (it's complicated)" - AH 2200E assignment 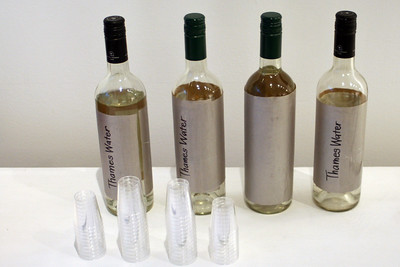 This celebratory event showcased the creative investigations of a class entitled "Water Now,"through the presentation of photographs, posters, a water treatment sculpture, and an archive developed by the students. This SASAH course was taught by Prof. Patrick Mahon from Visual Arts and the exhibit was on display February 9-12, 2016 at Satellite Project Space in downtown London. At the opening reception, an Indigenous ceremony was performed by Dan and Mary Lou Smoke and all attendees were invited to participate.
The Gravestone Project

The "gravestone project" or "cemetery project" was a research endeavor in which pairs of students were given a photo of a 19th-century gravestone in London's Woodland Cemetery. Using primary materials (old city, court, and burial records, etc.), the students learned about the lives and times of the people who were buried in "their" graves, after which they presented their findings in whatever format they chose.

Erik Bazjert created a video entitled The Welds of London.

A Season in Kigali. This video is a reflection of the experiential learning trip taken by Western students in May 2014. SASAH students Nicholas Pincombe and Rachel Goldstein were amongst the group of students that traveled with Prof. Henri Boyi and lived in Rwanda for five weeks. During their stay, the students were immersed in a number of community projects and initiatives while also learning about the culture and history of the country.